Today is Henry Parkes' birthday and it's worth recalling that it was his famous Tenterfield Oration on 24 October, 1889 that propelled the Australian colonies towards the great milestone of Federation in 1901. Perhaps we should commemorate his birthday rather than have a Queen’s Birthday?

Sir Henry Parkes was born on 27 May 1815 in Warwickshire, England. Parkes was known as the father of federation. He served five terms as premier of New South Wales between 1872 and 1891. Parkes became politically prominent in 1849 as a spokesman for ending the transportation of convicts to Australia from England.

And he wasn't called the "father of Federation" for nothing! He not only espoused the great vision of the birth of a united single country, he also led the way by fathering 17 children himself.

Just consider Henry Parkes' background. His father was an abysmally poor tenant farmer in Warwickshire who was thrown off his land. The family was destitute when 24-year-old Parkes caught a boat to Australia with his wife, Clarinda. They arrived as penniless immigrants in 1839, holding their first child who was born at sea two days before docking in Sydney.

Henry Parkes and his young family arrived in Sydney from England as impoverished immigrants in 1839. Almost immediately Parkes became active in politics. From early in his political career, Parkes was a supporter of federation. He joined the radical Constitution Association in 1848, and in 1850 established the Empire newspaper, which became the voice of republican and federal thinkers. In 1856 he gained a seat in the first New South Wales Legislative Assembly.

Parkes was one of our first businessmen politicians and served as the premier of NSW on five occasions. Alfred Deakin, our second prime minister, described Parkes as having flaws and indeed he did. He was bankrupted several times and had to relinquish his public office on each occasion. However, his vigorous public and private life continued unabated.

The Australian colonies had developed separately for the first hundred years of their existence but by the 1880s a move towards economic and social integration had started. The tariffs levied on goods moving across borders began to be seen as burdensome and a sense of Australian nationalism was growing.

The New South Wales government under Parkes had passed the Influx of Chinese Restriction Act in 1881, a Bill limiting Chinese entry to the colony. This led to an inter-colonial conference to discuss a coordinated approach to Asian immigration that same year.

At the conference, Parkes formally proposed a Federal Council to begin discussion on unification of the colonies. The colony of Victoria, however refused to join.

In 1883 France and Germany established colonies north of the continent in the New Hebrides and New Guinea respectively and the Australian colonies met in Sydney to consider a coherent defence plan. Victoria proposed a formal union, but New South Wales was against any amalgamation if Victoria was leading the movement.

A token Federal Council was established but New South Wales and South Australia refused to join so it had limited power to implement any change.

Perhaps the greatest stumbling block in the way of federation was the ideological division between the two most populous colonies. Victoria was committed to trade protectionism and advocated protective tariffs, believing they would allow industry to grow and provide employment. In opposition to this, New South Wales steadfastly supported free trade.


On 24 October 1889, Henry Parkes delivered his famous speech at the Tenterfield School of Arts in northern NSW on the need for the Australian colonies to federate into one nation ands establish a great national government for all Australia.  The Tenterfield Oration is significant because, although politicians had been discussing federation for some time, this was the first direct appeal to the public. In that stirring address, he said:

“The great question which we have to consider is, whether the time has not now arisen for the creation on this Australian continent of an Australian government and an Australian parliament … Surely what the Americans have done by war, Australians can bring about in peace.”

Parkes’ Tenterfield Oration led to his instigation of a federal conference in 1890 and a Constitutional Convention in 1891, the first of a series of meetings that led to the federation of Australia. He died in 1896, five years before this process was completed.

In Associate Professor Helen Irving’s 2006 4th Henry Parkes Oration she took as her starting point Henry Parkes’ vision for a united Australia and his statement: “The crimson thread of kinship runs through us all.” She reflected that:

“What bound all Australians together, Parkes believed, was both a common origin and common vision of a future Australian nation. The British heritage would be built upon, developed and Australianised.”


But if it’s the Queen’s birthday on 21 April then why do we have a public holiday to celebrate it in June each year? The idea of celebrating the sovereign’s birthday was introduced in 1905. After Queen Victoria’s death in 1901 there was a call to remember her long reign. The result was the creation of Empire Day. Queen Victoria was born on 24 May 1819. On 24 May each year, her birthday, an annual commemoration was held which was directed especially at school children to promote loyalty among the dominion countries of the British Empire. This day was celebrated by lighting fire-works in back-gardens and attending community bonfires. In 1958, Empire Day was renamed Commonwealth Day. However, this is no longer celebrated within the Australian community. Instead most Australian states have gazetted the official Queen’s birthday to be on the second Monday in June.

Perhaps celebrating the birthday of one of the fathers of federation such as Henry Parkes may be more relevant to Australians than either Queen’s Victoria or Elizabeth’s. Coincidentally, Parkes was born on 27 May 1815, almost three years earlier, to the day, than Queen Victoria. Federation Day sounds better than Empire Day, and it could still be held each year on the second Monday in June!

Snapshots: Federation
Posted by Glenn Davies at 4:58 pm No comments:

The time between 25 April, Anzac Day and 9 May, Australia’s future Republic Day, is a time of reflection each year on national symbols. A time to reflect on where we’ve come from and where we are going to. It was during this interlude that Australia’s unofficial poet laureate and one of the greatest living writers in Australian literature died at the age of 80 on 29 April 2019. 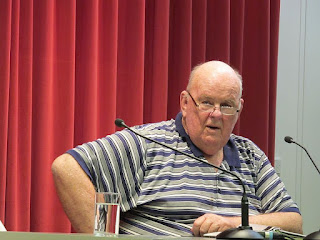 LES MURRAY was a witty, anti-authoritarian, national poet who spoke to the world. In a writing career that spanned more than 40 years and almost 30 volumes of poetry, he created a “vernacular republic” for Australia, a place where our language is preserved and renewed.

A nationalist and republican, Murray saw his writing as helping to define, in cultural and spiritual terms, what it means to be Australian.

Australian author David Malouf said Murray thought of himself as:


“...the voice of people whose voice otherwise was suppressed and who were otherwise unseen or looked down on.”

His greatest achievement was defining and describing the minute sensations of everyday Australian life, grounded in a recognisable vernacular language.

Les Murray was born in 1938 in Nabiac, a village on the north coast of New South Wales and spent his childhood and youth on his father's dairy farm nearby.

The area is sparsely populated, hilly and forested, the beauty of this rural landscape forming a backdrop to many of Murray's best poems, such as Spring Hail:


Fresh-minted hills
smoked, and the heavens swirled and blew away.
The paddocks were endless again, and all around
leaves lay beneath their trees, and cakes of moss.

His parents were poor and their weatherboard house almost bare of comforts. Murray remarked that it was not until he went to university that he first met the middle class. His identification was with the underprivileged, especially the rural poor and it was this that gave him his strong sense of unity with Aborigines and with “common folk”.

The late 1970s were heady days for Australian republicans. There were many town hall meetings, rallies and calls to “maintain the rage” after the 1975 Whitlam Dismissal. Donald Horne, Jim McClelland and Manning Clark addressed a public protest entitled “Kerr and the Consequences” on 20 September 1976 at Sydney Town Hall. The meeting explored the Australian constitution and ways they believed it could be changed for the better. This was also the year Les Murray published his selected poems, The Vernacular Republic. 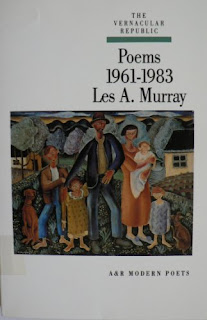 In The Vernacular Republic, Murray’s selected poems demonstrate how it is Australian language that is at the core of the national identity. It is the independence of an idiomatic Australian dialect that distances the fringe from its English centre. Murray’s poetry shifts our perceptions to show life centred ‘here where we live’.

Murray writes of The Macquarie Dictionary (1981), in his review-essay Centering the Language, that it shows:


‘...how much larger and richer our dialect is than many had thought, in part by gently but firmly shifting our linguistic perception, so that our entire language is henceforth centred for us, not thousands of miles away, but here where we live.’

The use of the title The Vernacular Republic for his selected poems brings home the point that a community becomes culturally independent in its use of a local language dialect, or a “vernacular”. Vernacular is one of Les Murray's favourite words and he often claims to be speaking in Australian rather than English.

Les Murray, both in public life and in his poetry, was an avowed believer in Australian cultural sovereignty. He was unyielding in his defence of a belief that had grown out of a desire to give voice to a very particular Australian identity, which to Murray's mind emanates from the bush.

At a time when Australian poets were turning their attention to its cities or moving abroad, Murray fixed his eyes on the bush. He considered it the only unique aspect of Australian culture and was widely seen as following the Australian “bush poet” tradition of Banjo Paterson, Henry Lawson and Dorothea Mackellar.

Dispossession, relegation and independence become major preoccupations of his poetry. Beyond this, though, his poetry is generally seen to have a nationalistic bent. The continuing themes of much of his poetry are those inherent in that traditional nationalistic identity of the 1890s — respect, even reverence, for the pioneers, the importance of the land and its shaping influence on the Australian character and bush-bred qualities and values such as egalitarianism, practicality, straight-forwardness and independence.

For Murray, his rural-centred Australian vernacular republic, although superficially modified by modern times and technologies, continues to exist essentially the same as it did in earlier times. Raised on bush traditions, he saw bush ballads as being vital to the national literature. In some ways, herein lies the core of Murray's much-vaunted opposition to modernism — that it is a concept of the technological worlds of the northern hemisphere, ignoring and even obliterating the place-specific voice of a popular literature.

Murray’s poetry locates us as a people here, in Australia, not thousands of miles away on the other side of the world. And it is here also that our sovereignty lies.

Les Murray: Poet in Residence
Posted by Glenn Davies at 6:05 pm No comments: