Surely time for an Australian Head of State


Back in May 2018, the Australian High Court took the scalps of four members of parliament. Centre Alliance’s Rebekha Sharkie, and Labor’s Susan Lamb, Justine Keay, and Josh Wilson, were all told they couldn’t sit in parliament because they had foreign citizenships when they nominated to enter federal politics. 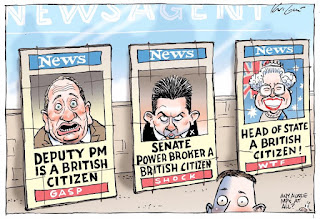 On 11 August 2018 what was dubbed ‘Super Saturday’ occurred with by-elections held across the country with the Liberals, Labor and the minor parties slugging it out as half a million voters went to the polls in five electorates in four states. In the end, not one electorate changed political hands.

The irony came when the newly elected MPs were sworn into Parliament by the Governor-General a few days later in Canberra. On 13 August 2018, Wayne Swann said:

When MPs who have returned to the Parliament after renouncing their UK Citizenship then have to pledge allegiance to Queen Elizabeth its surely time for an Australian Head of State.

So, let me get this straight...

Federal MP has dual citizenship with Britain? Disqualified. Head of State is 100% British? No problem! How can we keep chucking out MPs with dual citizenship when our head of state isn’t even a citizen at all.

On Monday 13 November 2017, the constitutional storm over the dual citizenship debacle blew in replacement Senators for those who had been declared ineligible by the High Court to hold political office in Australia’s Federal Parliament as they contravened s44 of the Australian Constitution. Some of the senators were declared ineligible due to having British citizenship by descent. But how will the replacement senators reconcile the absurdity that to become a member of the Federal Parliament they must swear an Oath of Allegiance to the British monarch.

As at 10 November 2017 there were 12 Senators and federal MPs who were under constitutional question. Currently there will be at least two by-elections held due to federal MPs acknowledging they hold dual citizenship. There may well yet be more by-elections unless a general election is held. Yet when the by-election results are finally tallied, or a double dissolution election is held and the next federal parliament is elected, these same MPs and senators will be required to swear allegiance to the Head of State of the country of which their colleagues are citizens and as a result had been declared ineligible to be elected to the federal parliament.

Surely this is the elephant in the room. How is it possible for the High Court to disqualify members of parliament on the basis of Section 44 of the Australian Constitution, as being (unknowingly) citizens and therefore subjects of a foreign power, when these same MPs and ministers swear allegiance to the monarch of this same foreign power (and her descendants), who happens to be our Head of State?

There can be no doubt that the "Queen of Australia" is a British woman, yet we, here in the Antipodes, are quibbling about people we have elected to our Federal Parliament whose dad or mum was of British ancestry.

How can we keep chucking out MPs with dual citizenship when our head of state isn’t even a citizen at all?

Posted by Glenn Davies at 10:47 pm No comments: