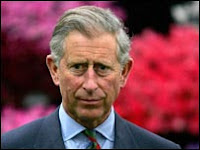 Prince Charles flew to New York a few months ago booking the entire first-class and business-class sections of a jumbo jet for his 20-strong entourage. The point of the US visit was to pick up an award for his work on the environment.

To underline his commitment to reducing his 'carbon-footprint' Charles travelled by scheduled flight instead of a chartered or private jet. However, he and his party travelled exclusively in the first and business-class sections, totalling 62 seats. This meant their effective 'carbon footprint' was three times what it would have been if every seat had been used. The short return trip to New York resulted in the emission of 24 tonnes of carbon dioxide. Prince Charles would need to pay $445 to plant trees to offset this figure.

I think I'd be more interested in calculating Charles's 'relevance footprint'. I wonder how many forests of trees he would have to plant to improve that footprint?

It might be worth constructing a footprint formula for the relevenacy of the Royal family!
Posted by Glenn Davies at 5:30 pm No comments: