Queenslanders were deeply saddened to hear news of the recent death of Wayne Goss, a life member of the Australian Republican Movement. The loss of this incredible man and proud Queenslander has left a gap in the ranks of those working towards securing an independent Australia.

TWENTY-FIVE YEARS AGO on 2 December 1989, 32 years of conservative rule in Queensland was brought to an emphatic end when 38-year-old lawyer Wayne Goss claimed victory in a Labor won landslide. Goss and Labor scored a 24-seat swing, the worst defeat of a sitting government up until that time in Queensland. Voters had clearly grown tired of the Joh era and the stench of corruption uncovered by Tony Fitzgerald QC. With the election of Goss and Labor, Queensland was rescued from the deep chasm of corruption, self-indulgence and arrogance it had fallen into.

Wayne Goss’s victory brought a breath of fresh air to government in Queensland. It brought light to the dark corners of government where corruption had taken root and led to a raft of reforms to rebuild the state and restore transparency to Queensland’s political system.

Once installed in office, he presided over the implementation of many of the reforms of the landmark Fitzgerald Inquiry into police corruption. He was absolutely driven to reform Queensland in terms of ridding the state of corruption and restoring the integrity of the electoral system. Establishing the Electoral and Administrative Reform Commission to abolish the electoral gerrymandering that had defined the state’s political environment throughout the Bjelke-Petersen years returned democracy to the people. His initiatives, in areas such as education, health, the environment and accountability, set new and higher standards for Queensland.

Wayne Goss surrounded himself with people who would go on to have significant political careers. His chief of staff at this time was Kevin Rudd, later leader of the federal Labor Party and Prime Minister of Australia and his 1989 campaign director was Wayne Swan, subsequently treasurer and deputy prime minister of Australia. Also instrumental in his team in the early days of his premiership was Glyn Davis, who was appointed in the early 1990s to the Republic Advisory Committee.
Wayne Goss was a life member of the Australian Republican Movement.

The Queensland branch of the Australian Republican Movement was launched in 1993 during his Premiership. It was reported in 'Coalition sparks as Libs embrace republic', The Canberra Times, 30 March 1993, that Goss announced plans to remove references to the Queen and the Crown from all state oaths, affirmations and legislation. This was the beginning of an ongoing Queensland campaign.
On 28 April 1993, a new ministerial oath removing reference to the Queen was taken for the first time at the swearing in of the Attorney-General, Michael Lavarch. The Queensland federal politician Lavarch promised to

Michael Lavarch was later elected as a Queensland Constitutional Convention delegate for the ARM.
Goss stated in the ARM newsletter, 29 April 1993:


'There is no foreign power or benevolent monarch in some other part of the world watching over us. Australia’s on its own now and we must have a structure of government and a national identity that reflects that we are independent and we are Australians first and we are no longer attached to, or an appendage of, the British royal family.'


On 29 November 1995, Wayne Goss was guest speaker at a major ARM dinner at the Gateway Hotel, Brisbane. This marked his first major step in the republican debate. At this dinner Goss outlined


“... a plan to consolidate the Queensland Constitution and then to consult widely to prepare the constitution for a transition to a republic.”
~ (Armlet, Summer 1995/1996, p1)

ARM (Qld) supporter Gary Shadforth recalls how in May 2004 he


“... had the privilege of meeting Wayne at a Republic Upstairs function held many years ago in an old Brisbane pub held by the Queensland Branch of the Australian Republican Movement. Wayne was the keynote speaker. So many interesting and enlightening anecdotes with that deep rich voice. He certainly was a man who stood out in a crowd."

The last time Queensland republicans heard that “deep rich voice” was at the ARM (Qld) AGM held in the Red Chamber (old Upper House), Queensland Parliament on 24 November 2011. The guest speaker that evening was Courier Mail reporter Paul Syvret. Wayne Goss, as always, sat at the back of the chamber, however on this evening he was in full flight contributing his observations on the current political situation. His voice, as always, was a delight to hear.

Wayne Goss resigned as Premier and Leader of the Labor Party on 19 February 1996 and assumed something of an "elder statesman" role from the back benches.

He retired from politics at the 1998 Queensland state election. After his retirement from politics, Goss served in a variety of community and business roles.

Goss battled a series of brain tumours for 17 years, undergoing four operations to remove them. He died on 10 November 2014.

In a condolence speech to the House of Representatives on 26 November 2014, former Treasurer Wayne Swan said:


“With the passing of Wayne Goss, Queenslanders have lost one of their finest leaders. Wayne changed Queensland, the state we love, for the better. He dragged it into the sunlight after 32 years in the darkness. He was a leader of deep integrity. He was someone that we will all miss a lot. I remember Wayne as a role model for leadership and integrity and as a man who always held humble Queenslanders close to his heart.”

Wayne Goss was a premier worthy of celebration.

Vale, Wayne Goss.
Posted by Glenn Davies at 7:42 am No comments:

Today is the 160th anniversary of the Eureka Stockade, a key event in the development of Australian democracy and Australian identity. 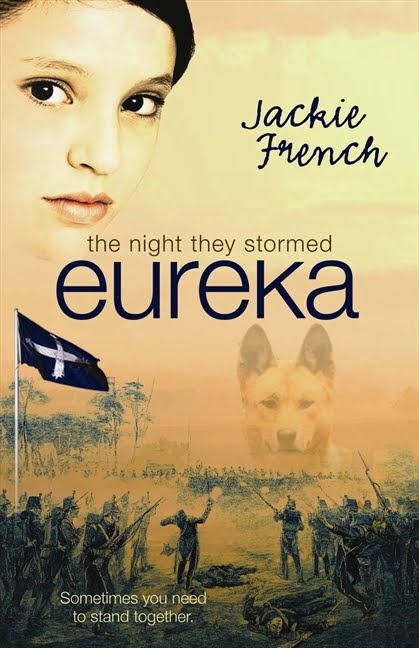 The Eureka rebellion came about because the goldfield workers (known as 'diggers') opposed the government miners' licences. The licences were a simple way for the government to tax the diggers. Licence fees had to be paid regardless of whether a digger's claim resulted in any gold. Less successful diggers found it difficult to pay their licence fees. The Eureka rebellion is considered by some historians to be the birthplace of Australian democracy. It is the only Australian example of armed rebellion leading to reform of unfair laws.

Although the 1854 Eureka Stockade insurrection was as atypical as it was dramatic, it was responsible for forcing republican and revolutionary language into more common use.  Shortly before the Eureka insurrection, an American present wrote:

the people are on the eve of a revolution ... Folks here are republican enough in their ideas, though they do not wish you to think so.  The bone and sinew of the country are the workingmen, and they feel a great desire to take care of themselves.
On the opposite side of the Pacific Ocean, Americans generally believed that ultimately Australia would also become a republic.  The organisation, “Young America”, hoped that Australia would follow the lead of the United States and become a republic.  Franklin Pierce was elected President of the United States in 1852 on the “Young America” platform.  “Young America” believed that the “manifest destiny” of emerging nations was to be, among other things, republics. This idea was picked up by Jackie French in her novel, The night they stormed eureka.

I was fortunate to hear Jackie French speak at the 2014 National History Teachers’ Conference in Brisbane. French is the third Australian Children’s Laureate, with her post taking in 2014-15, the position having been shared previously by Alison Lester and Boori Monty Pryor.

Jackie French published her first book, Organic Gardening in Australia in 1986, which has been followed by more than 140 titles, spanning non-fiction, picture books, collections, children’s, YA and adult, and incorporating fantasy, contemporary and historical fiction. Her books have garnered more than 60 awards. However, she has become particularly well-known for her time-slip novels such as Somewhere Around the Corner, Daughter of the Regiment, Macbeth and Son, and The Night They Stormed Eureka.
Jackie French’s junior fiction novel The Night They Stormed Eureka (2009) starts when Sam, a teenage girl, seeks refuge in a cemetery after having run away from her mother’s abusive boyfriend. In mental and physical pain, Sam imagines what life would have been like for the family of Percival and Elsie Puddleham, their names and dates carved on a headstone she shelters near. The depth of Sam’s longing for love and comfort reaches across the years to meet a yearning for a lost child, and she finds herself in mid-19th century Ballarat, not long before the bloody battle at the Eureka Stockade. Now in 1854 Sam finds a warm, inviting home with the Puddlehams who run “the best little cook shop on the diggings”. The Puddlehams dream of buying a luxury hotel with velvet seats, while others seek freedom from the government, with its corrupt officials and brutal soldiers.

But it was a time of great unrest among the miners on the diggings and Sam is swept up in the Eureka Rebellion, an iconic event on our national heritage landscape. As the summer days get hotter, and the miners’ protests are ignored with catastrophic results, Sam experiences at first-hand the power of a united stand, which will change her life forever. French’s recreation of the uprising against the British is not the Eureka of history books. She does not know if she’s changed the past or if it was another past. This was French’s way of showing that many of the history books have got it wrong about Eureka. In Sam’s Ballarat the Eureka rebellion was really about turning Australia into a republic, rather than an uprising of miners over compulsory mining licence fees. And while there were only 120 men left in the stockade when it was eventually stormed, in The Night They Stormed Eureka this was because thousands were lured to different parts of the camp through trickery.

Taking a fresh look at our past and recreating historical events is a thread that runs through many of French’s books resulting in the blending of historical events with contemporary characters, like Sam, who create a bridge for young readers into the past. At the end of The Night They Stormed Eureka, Sam awakens in the graveyard to a concerned friend and worried teacher who, suspecting she was homeless, have been looking for her. Experiencing Eureka has changed Sam and, for the first time, she reaches out for help. What she learns at Eureka is that when you stand together, you can change the world.

Jackie French’s fresh look at an event entrenched in our national heritage will touch and surprise every reader on an event that almost turned us on the path to republicanism.

Posted by Glenn Davies at 10:36 pm No comments: