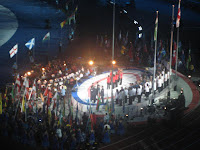 The debate about whether "Advance Australia Fair" or "God Save the Queen" would be played at the Opening Ceremony of the Melbourne Commonwealth Games hit a raw nerve with everyday Australians during February and March 2006.

M2006 organisers indicated there was no obligation to play the British national anthem at the Opening Ceremony. If the Queen is the Queen of Australia what problem could she have with the Australian national anthem. To play anything other than "Advance Australia Fair" would be a direct challenge to Australia's national identity.

As the debate advanced, political leaders and the Australian's for Constitutional Monarchy (ACM) began talking about a compromise position whereby both anthems could be played. If there's one thing you never compromise it's your identity.

Our national anthem should be the only anthem played during any formal proceedings.

Some monarchists, such as the ACM were embarassed with the prospect of only Australia's national anthem being played and warned Australians that the rest of the world would think Australian's were disrespectful and rude if the British anthem were not also played. They were proven wrong. In typical Australian style, the organisers stood strong on the issue of the anthem and played only "Advance Australia Fair", while also following through on their plan to play some bars of "God Save the Queen" while singing the Queen "Happy Birthday". It was a clever and uniquely Australian celebration about which all Australians should be proud.

Three cheers to the coming republic ...
Posted by Glenn Davies at 3:36 pm No comments:

In two days time it will be Queen Elizabeth's 80th birthday. Most 80 years olds are long retired, but not that trouper the Queen.

For the first time, after midnight in the heart of London, rehersals have been held for the Queen's funeral. As happened for her mother when she reached about that age, a mock funeral march has been staged. They'll do it every year. In the case of the Queen Mother, they'd had lots of practice by the time she died at 101.

But the Queen displays similarly robust health to her mother and there's no sign of her standing down. But when Australia's Prime Minister John Howard stated during her latest trip to Australia during the Melbourne Commonwealth Games, "I don't believe Australia will become a republic while the Queen is on the throne. Beyond that, I don't know", the code appeared that this may be her last visit. But please let's not have any more visits from Charles. His 2005 visit was lacking in crowd-pulling power and plain dull.

The common view is that it will be the death of the Queen and ascension of Prince Charles that will trigger another push within Australia for a republic. When the Queen dies or steps down, that will change things because there is a reservoir of goodwill for the Queen which there isn't for Prince Charles. It would be much better and more dignified to see the debate happen well before such an event.

Happy birthday for 21 April - and three cheers to the coming republic!
Posted by Glenn Davies at 3:36 pm No comments: