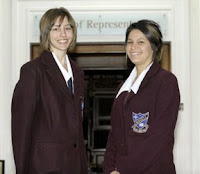 There were twenty-seven students from Queensland among 122 Year 11 and 12 students who attended the National Schools' Constitutional Convention in Old Parliament House, Canberra between 29 April and 1 May 2008.

On the Convention topic Australian Republic: to be or not to be? the students, who were from across all states and territories, voted in favour of a republic. In response to the question: are you in favour of the Australian Constitution being amended to establish the Commonwealth of Australia as a republic? 54% were in favour and 45% were not (There was one informal response).

Each student was required to deliver a brief address outlining their point of view. Following discussion and debate, the students took part in a mock referendum using a preference voting system to determine the preferred model: Model 2 was favoured by 73.1% of students; Model 1 by 18.5%; and Model 3 by 8.4%.

It was only the second time in thirteen years that delegates to the Convention voted in favour of amending the Australian Constitution. Decisions taken at the Convention were presented to Deputy President of the Senate, John Hogg, Senator for Queensland, for tabling in the Senate.

Three cheers for the coming republlic!
Posted by Glenn Davies at 11:00 pm No comments: