The Queensland ARM’s Christmas Party was held once again in the Queensland Legislative Council Chamber (Red Room) and later at the Riverside BBQ Area at Parliament House. This unique venue is in the heritage listed part of the complex and, though on arrival its somber ambience seemed to dominate, our guests enjoyed spending some time there taking in its history, admiring the gold leaf painting, wall of names, and the echoing footsteps of those who made their way into the Red Chamber to hear our guest speaker, Courier Mail senior journalist Paul Syvret. 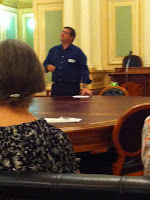 As the Australian Republican Movement's Queensland State Convenor, I kicked off with a short address and answered questions about branch and national matters. This was also the night we claimed the Legislative Council Chamber as a ‘republican space’ – due to the many years we have been holding our annual meeting here.
Afterwards, a short walk and quick two-storey ride in the elevator took us to our dinner venue, the Riverside BBQ Area, with its highly prized view over the Brisbane River and Southbank. The rain held off so we could enjoy the full space. 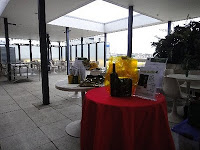 Careful placement of some Christmas decorations – thanks to the help from the youngest Republican in the place, Xavier Donovan – contributed to the festive mood, while all copies of The Essential Australian Republic Handbook left out on tables were taken home, no doubt for further review!
Andrew Grotherr did a sensational job at the coalface (on the BBQ!). Thanks go to Andrew and Belinda Donovan for setting everything up for dinner, Bill Turnbull for helping hang the merchandise, and Betty Smout for donating a prize for the raffle. 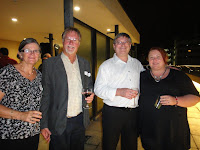 The new format of gathering to hear our guest speaker first meant that everyone could take their time over dinner and feed our Republic souls with like-minded discussion.
It was terrific to celebrate at our end of year celebrations with our members and guests. Thank you for your continued support and I look forward to seeing you all again at ARM activities in 2012.
Never let a good crisis go to wastePaul Syvret, 2011 ARM Guest Speaker, Queensland Legislative Council Chamber, 24 November 2011
Ladies