Republicanism emerged as an issue of major public debate during the 1990s. In the 1990s, the popular definition of "republic" was simply the removal of the British monarch as Head of State. This was seen as the last step in Australia’s political development.

Australians have long discussed the idea of replacing the constitutional monarchy with a republican constitution, even during the 19th century, before federation in 1901. In the 1960s, republican activity was restarted by authors Geoffrey Dutton and Donald Horne. At the same time, the student magazine Oz lampooned the monarchy.

A decade on, the dismissal of Prime Minister Gough Whitlam by the appointed Governor-General on 11 November 1975 outraged many Australians. The 1975 Constitutional Crisis drew attention to Australia's Constitutional arrangements and, since those turbulent days, several notable Australians declared a commitment to an Australian republic. There were many Town Hall meetings and calls to "maintain the rage". During these years, the Australian Labor Party edged towards declaring itself for the republic. This it eventually did in 1982.


The Australian Republican Movement began over lunch at the residence of the former Premier of New South Wales, Neville Wran.  In 1987, Wran had publicly stated his support for Australia becoming a republic and nominated 2001, the centenary of Australia’s federation, as an ideal date.  He said that he expected moves towards a republic would gain ground during the 1990s. Wran was supported at the time by Prime Minister Bob Hawke. On 7 July 1991, a group of prominent citizens held a meeting in Sydney to launch a republican movement under the chairmanship of author Tom Keneally and included many eminent persons from the political left and cultural centre of Australian society.

On this day, 25 years after the birth of the Australian Republican Movement, Malcolm Turnbull is on a knife-edge electoral count to decide whether he will be elected for the first time by the Australian people as Prime Minister of Australia. 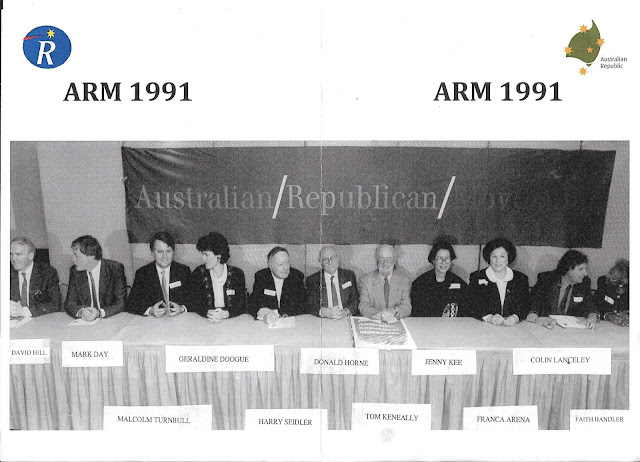 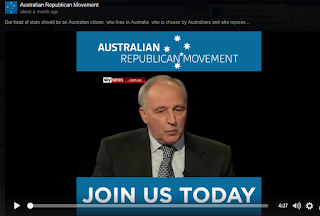 Posted by Glenn Davies at 3:21 pm No comments:

Now time for #AusExit to an Australian Republic


As England firmly turns its back on the European project, and as Scotland and Northern Ireland start to wonder whether they still want to be part of the United Kingdom, Australians are loudly questioning our own relationship with England. 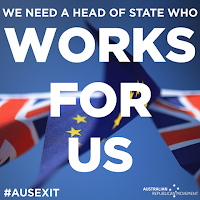 The Scottish and the Irish are asking the question. And so are we. Australians are asking whether it is right that the Constitution of modern, multicultural Australia should continue to be linked to the royal family of a country that is turning its back on Europe, and in some ways, the world?

The best possible response to Brexit is Ausexit - to finally replace our hereditary English monarch with an Australian, whether elected by our people or appointed by our Parliament, who represents the best of us, and says to the world,

The Australian Republican Movement Chair, Peter FitzSimons has said the membership of the ARM over the past few days

“is suddenly surging once more, and did so from the very moment the vote came in."

The Australian Republican Movement argues an accelerated end to the British Monarchy in Australia will help promote our trade relationship with our second most important trading partner, Europe.

They cite statistics showing that in 2013-14, Australia’s trade relationship with the European Union was worth $83 billion, second only to trade with China at $160 billion, and that three quarters of Australia’s EU trade is from outside the United Kingdom.

Peter FitzSimons asked on the day after the British referendum

“With the British people voting to leave the European Union, what benefit is there to Australian business in continuing to have the British Monarch as our Head of State?

Australia's economic interests are best served by an Australian Head of State, promoting Australian exports in growing markets. Britain is turning its back on Europe, but modern Australia must embrace it.

Australia is a great trading nation. The European Union is Australia's second most important trading partner after China. A British Monarch is even less useful to us today than they were yesterday.

Australia's economic future should be in the hands of our own citizens - especially our highest office. We need a modern Head of State who works for us.”

The British people have a right to choose their own future. And so do we. But in making this choice, they have helped make ours much clearer. It's time for us to replace the British monarch with an Australian Head of State. 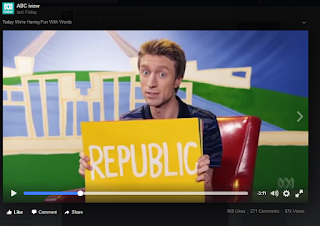 Posted by Glenn Davies at 8:31 am No comments: