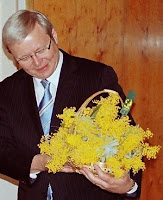 Wattle Day is celebrated annually on the first day of spring, 1st September. It is a time when the smells of spring are in the air and the vivid gold of the blossom is literally arresting. A sprig of Australia's national floral emblem, the golden wattle, Acacia pycnantha is traditionally worn on this day. The green and gold of its leaves and blossoms were declared national colours in 1984 and in 1988 the wattle was adopted as the official national flower. The 1 September 1992 was formally declared as 'National Wattle Day' by then Minister for the Environment, Ros Kelly, and in 1993, the Australian Republican Movement gave its support to Wattle Day celebrations throughout Australia on 1 September.

The first known use of wattle as a meaningful emblem in the Australian colonies was in Hobart Town in 1838 when a resident suggested wearing a sprig of wattle to celebrate the jubilee of the landing as Sydney Cove. There was in this seemingly small gesture, a suggestion of an independent Australia. At a regatta in 1842 to mark the anniversary of Tasman's discovery of Van Dieman's land, many of the celebrant's again wore a sprig of wattle.

But it was not until the beginning of the twentieth century that an official Wattle Day was proclaimed after a suggestion made by the naturalist Archibald Campbell in Sydney. Campbell's suggestion led to a meeting to form a Wattle Day League which coordinated the states into celebrating the first 'Wattle Day' on 1 September 1910. The Wattle Day League was a patriotic society in the vein of the Australian Natives' Association. The day was a celebration of the unique land, people and institutions of Australia, and was marked in Adelaide, Melbourne and Sydney with activities including the planting of wattle trees in the school grounds, decorating public sites with wattle and wearing wattle. The Sydney Morning Herald wrote: "To the native born Australian the wattle stands for home, country, kindred, sunshine and love - every instinct that the heart deeply enshrines". The celebration of the day continued until the beginning of the first world war.

Wattle celebrations first arose as occasions when earlier generations of Australians stood up and said: "I am from this land. This place is home". Like the Southern Cross, the appeal of the wattle is not first and foremost to the idea of the nation but to the idea of place. Because there is no better symbol of our land than wattle, 'National Wattle Day' each year could be the day Australians recommit to the care of the land. Perhaps 'National Wattle Day' could become our land's birthday. This is the time each year when the landscape waves its golden flag, and in response, many Australians resolve to both respect and care for the land. Perhaps 'National Wattle Day' could be a good replacement for Queen's Birthday holiday.

None of our existing key public holidays are about us Australians as a contemporary people and the land they love. Significant as it is in Australian history, Australia Day is essentially a marker of an event in eighteenth century British colonial history. Anzac Day, as sacred as it is in Australia's national psyche, was inspired initially by the valour and deeds of young Australians in a far away land, out of loyalty to a distant empire. On the other hand, 'National Wattle Day' is about land and people. Wattle is the blaze of colour that paints Australia's landscape every year. It is the gold that blends with the eucalypt green to form the green and gold around which Australians so willingly unite. Because wattle springs organically from the land its bonds Australians as a people to the land. It is a far more meaningful day of celebation than the Queen's Birthday which relates to a monarch in a foreign land, whose real birthday is at another time and which is marked at differing times around Australia.

Because of its association with the land and the care that indigenous, settler and modern day Australians have for it, 'National Wattle Day' can be seen as an occasion to celebrate and honour the shared earth. Respecting and caring for land, protecting its native flora and fauna, and using wisely its water resources are major challenges to commit to as a people. Australia's future is bound tightly with the health of Australia's environment and land.

One of the great failings of the republican movement of the 1990s was it did not project a sense of feeling of place. Instead, it pinned all emotional connections to Australia one one idea - an Australian President. This was a republic embodied, literally, in one person. Australians now need to embody the spirit of the future republic not in the person of the President, but in place. Wattle captures something crucial to the success of the republic - feeling for country.

As a living expression of land, wattle links us to the earliest occupation of the Australian continent. Indigenous Australians used wattle for thousands of years as a season marker (a sign that the whales were coming), as a source of food, and the raw material of hunting and sound instruments. This is part of wattle's wonderful heritage as a unifying symbol of land, people and the nation - a symbol that has no unpleasant baggage.

Wattle is a broad and inclusive symbol. It grows in all parts of Australia, differing varieties flowering throughout the year. It links all Australians, from the first to the newest at citizenship ceremonies. It touches all levels of society, from very early pioneers and World War 1 diggers (buried with a customary sprig of wattle) to victims of the Bali bombings and the nations best who are honoured with Order of Australia awards with insignia designed around the wattle flower.

The wattle flower symbolises an egalitarian, classless, free citizenry. The democracy of wattles - the fact that they grow in all states - was the overpowering reason why the wattle and not the waratah was chosen as the floral emblem in the early twentieth century. In September 1981, historian Manning Clark wrote in the Sydney Morning Herald:

"I love the spring. It means the wattle comes out again. It is a symbol of everything one loves about Australia and the ideal of the uniqueness of Australia. To me every spring holds out the hope that it won't be long before Australia is completely independent [but I also] share Henry Lawson's view that blood should never stain the wattle". In other words, independence of course, but peacefully achieved.

Wattle is a metaphor for innocence and hope, the constant promise of rebirth, that simple and powerful beauty of the wattle flower, indigneous, Australian, unsullied by the memory of war and destruction.

When the blaze of wattle lights up the Australian landscape each year, let's all remember that the wattle is a symbol of our land that unites us all. 'National Wattle Day' on 1st September each year is an appropriate time to commit ourselves afresh for caring for this land.

Three cheers for the coming republic!
Posted by Glenn Davies at 2:23 pm No comments: